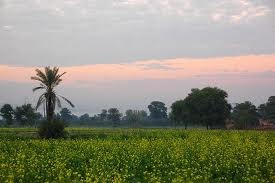 The dancing leaves of the ‘sarson’ (mustard) plants shone as beads of freshly sprinkled water glistened on them. They sparkled when warm, bright rays of the sun, propped up high at the dawn sky speared through the hazy air around luscious fields of Punjab. Each bead of fresh water from nearby canals affirmed the life of these plants. But this life was shared by many more!! Every such morning a scrawny figure, followed by a frail woman and children headed towards these plants, the dream and achievement of this diligent farmer and maybe thousands like him across the country. With a stomach full of milk and flat bread or tea, he summons his animals to begin the task of the day. Ploughing, sowing, harvesting, threshing, husking, at whatever stage his crops are. Meanwhile his wife and children find themselves small chores like bundling harvested material or carrying sacks to the storages.
Time flies anyways but when painstaking workers continuously work their muscles, it seems that the harsh sun of daytime falls on their dark faces even sooner. Soon beads of sweat build on their brows and drip on their hands as they work. The glaring sun almost blazes their head until stings of pain shoot inside it. The man knits his brow and ties a piece of cloth, hanging on his shoulder till now, on his forehead. But nothing can avoid the shafts of light approaching his sweaty, burning body each second. However, nothing can stop him from working on his fields. A while ago his family had left to fix the afternoon meal so now a piercing voice called him to it. With this a rigorous day of work comes to an end but with minimal return. The farmer will spend part of his evening trying to sell his produce to wholesalers or middlemen. The extensive channel of marketers keeps reducing his profits and his hard work is paid with almost nothing. It only disappoints him to witness how he drowns into loss each day after using all his sweat and blood to churn the best of nature products for his nation.
This is the story of many million farmers working on our soil. It is a shame how an agro-based country like Pakistan engaging 41% of labor is not able to market its products efficiently for the sake of the poverty prevailing over these men. For example the crumbling ‘Sabzi Mandi’ (Fresh fruit and vegetable wholesale market), largest in the country is on the verge of explosion even after making RS.20 crores each day. Where agriculture accounted for 53% of the GDP, it has declined to 21% today after the introduction of elaborate agricultural development policies. The lapse poses great questions to our strategies for development. For example are we focusing the right areas for development by excessively industrializing ourselves when our greatest potential lies within the products of our soil? I hope we are able to strengthen the rear of our train (rural population) and prove that we are a ‘developing’ nation.

Call it Indian film and treat it seriously!

Short articles that I have compiled on Ismaili history and Muslim civilisations, as well as extracts from Mawlana Hazar Imam's speeches on various topics

"F" is for Fundraising

Advice and opinions on the social sector from Sand Dollar Consulting

(Somewhat) Daily News from the World of Literary Nonfiction

Inner Workings of My Mind